It’s worth keeping an eye on when and where Idaho Fish and Game are stocking fish in our local ponds. You may even be surprised to discover that in some ponds, closer to town than you’d think, you can find trophy trout between 20 and 26 inches in length lurking in the shallow weed beds.  The trick is fishing for them the day they are planted or shortly after.  Stocking such huge fish in local ponds is no secret. It’s public information as to when and where they will be planted, and you’d better believe there are people watching.

Other smaller ponds can hold bass and bluegill, with the occasional 12-inch goldfish that was once someone’s pet. One pond in particular, located out in Meridian, seems to be a hot spot for releasing unwanted pet fish. Here anglers can try their hand at catching a variety of colorful koi, with the occasional freshwater angelfish swimming around. I should note that releasing a pet fish is illegal, and if caught the fine can be more hefty than you would think. Still, when seeing such a cool fish swimming around in a local pond it takes a lot of restraint not to try and catch it.

With a nice day and a pressure system of 29.77, I set off with my four-year-old son to fish Eagle Island State Park.  This particular pond is a decent size and offers up plenty of room for a much needed backcast. Currently the weather is not warm enough to really bring up the bass and bluegill, and the pond is relatively shallow, meaning you have to cast out pretty far in order to get a shot at the trout in the deeper water. This is a great opportunity to practice a power-cast that, when achieved, could reward you with a fish.

The osprey were circling above in search of shallow-swimming fish as my son, Cruz, selected a fly from the special green Umqua fly box he carried to our spot.

“Hmmm, what looks like a good one?” Cruz asked, while skimming the box.

“How about this one?” I asked, pointing to a small halloween leech. The size 10 halloween leech has been a great fly for our local ponds, so I was really hoping Cruz would agree.

“We caught fish here with that fly last year…” I said, encouraging Cruz after he had paused, possibly wanting a different fly.

WHAM! The sound of a large branch hitting the water echoed over the small pond.

“Look, look, look!” I said pointing to the osprey, now sopping wet and flapping its massive wings to get off the water.

Nothing was in the talons of the bird as it flew our way, but as it gained altitude, the osprey ruffled up its feathers mid-flight and shook its body like a soaked golden retriever.  More water than I expected rained off the bird as it soared away.

I was lost in thought. Why had I never noticed those birds shaking off water in that manner? I had always assumed water just beaded off of them like a duck. Perhaps I have never seen one so close before. Still, it was something I did not expect to see.

Armed with a 5wt Lamson Velocity with a 5wt Scientific Angler Amplitude textured line tightly spun on a Guru Reel, I was ready to lay out some rope. Cruz stood to my left as I peeled out line.

“Here we go.” I said, as line began to zip through my guides with the power of a double haul. The fly landed out in the pond, stopping short of my desired distance due to the lack of line I had pulled off.  I reeled in the line, and I swear I felt the nibble of a fish as I brought it in for another cast. But just as soon as I felt these small tugs they were gone.

I peeled off more line, and before making another cast I waited for another fisherman who was walking behind us.

With my backcast clear, I shot more line out. Cruz grabbed the handle of the fly rod below my grip, and pulled line from behind my fingers to bring our halloween leech to life. Although my hand was still in full control in case a fish took, something caught my eye.

“Look, Cruz.” I said, pointing to the angler who had passed behind us and was now setting up to fish.

We couldn’t help but watch as the little black boat motored out 80, 90, 100 feet before turning to drop the line.  The roar of the little boat was louder than expected, as it left behind a large yellow bobber and returned to shore. 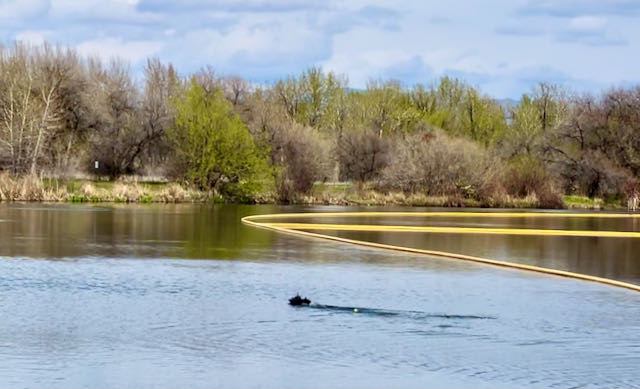 With the line back out in the water, I retrieved the fly as Cruz stood nearby.

“Hey!” I said, feeling a small twitch at the end of my line. “Hey!” When the twitch continued. “There’s a fish!”

The small fish fought as hard as it could, but on my end it was hardly anything. When I brought it into shallow water, the little fish thrashed near the surface and Cruz caught sight of it.

If I had thought the splash of the osprey was loud, Cruz’s excitement easily rivaled it. Surrounding anglers watched as we brought in a very small but feisty bluegill. 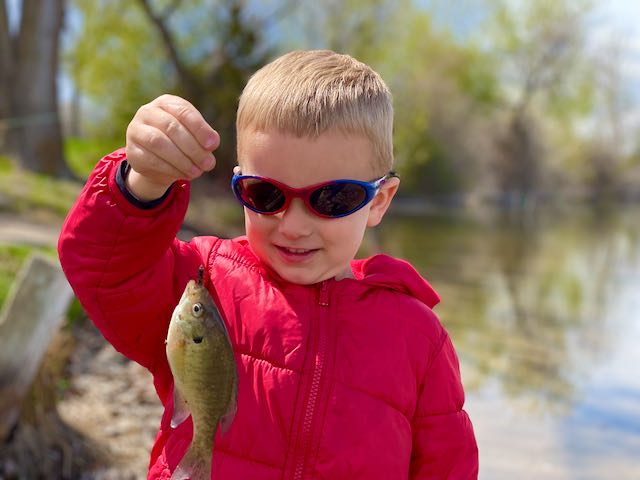 The little fish shot away like a rocket once back in the water, and Cruz was not only interested, but now invested, in catching another fish.  He was now back to holding the handle of the rod while bringing in the line. I still had my hand on the handle above his hand just in case.

“IT’S A FISH!!!!” Cruz screamed, feeling the rod spring to life. This was a bigger fish, and I tried handing off the rod to Cruz to fight the fish, but he just wanted to watch. This little rainbow trout had significantly more fight than the little bluegill, and Cruz was so excited he was performing what looked like a hopscotch as I brought in the fish.

Cruz insisted he let the fish go. As I quickly unhooked the trout I handed it to him and, before I could get a picture, he pitched the fish back into the water. 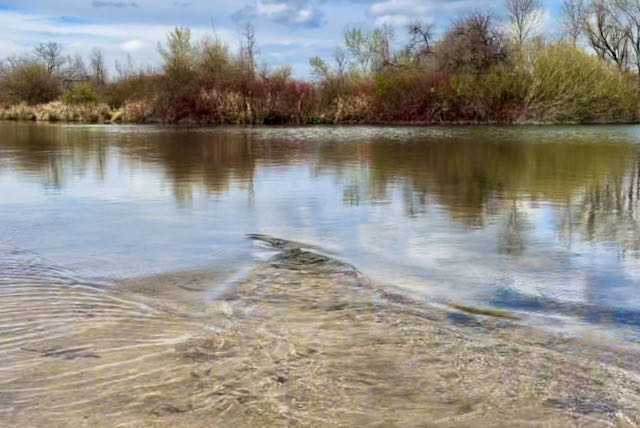 “Whoa, hey man…” I said, as I watched the wiggling wake of the fish as it swam off.

“Is that how we handle a trout?”

Cruz cautiously shook his head no.

“It’s ok, we just need to be more gentle with trout, right?”

As luck would have it, it didn’t take long to get into another trout. This time Cruz was up for bringing in the fish all by himself. 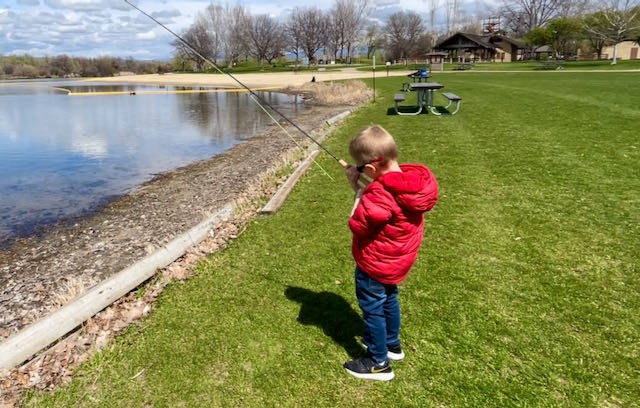 “You are doing a good job, man.” I said, while every once in a while lifting his rod tip back up as he fought the fish.

“What kind of fish do you think it is?”

The fish was now thrashing in the shallows.

“Okay, man. You can stop reeling, and just lift your rod tip.” Cruz stopped reeling, and held the fish at bay.

Cruz listened well, and successfully brought the fish onto the bank.

“Nice job!” I said, taking the rod and placing it out of the way. Cruz jumped down to the fish, and I quickly unhooked it.

“Yeah, I want a picture.” Cruz said, picking up the fish. 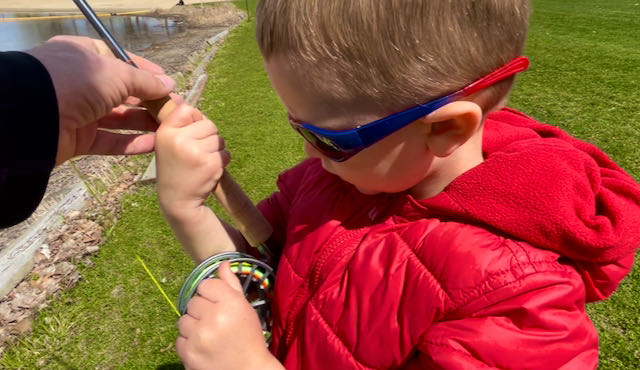 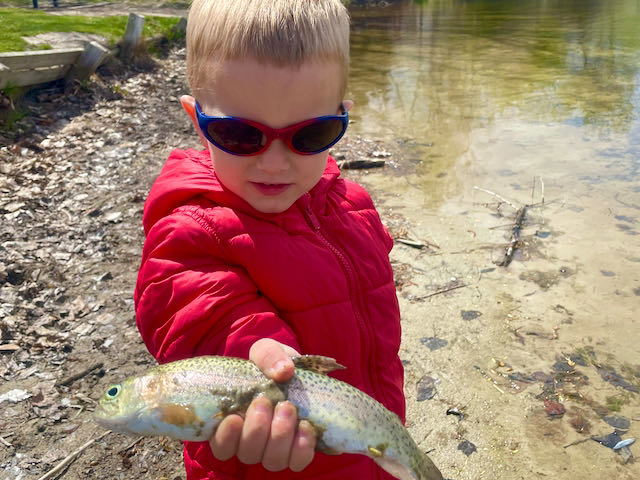 I was ready with the camera and, after a quick snap, Cruz softly placed the fish back into the water.  The only problem with his release was he was too small to reach anything deeper. The fish laid there in the 1/4 inch of water.

“That was nice and soft, Cruz. Good job.” I said, grabbing the fish and getting it into deeper water. As soon as the fish was upright, it bolted.

“There goes your fish.” I said.

“Dad, my hands are greasy.”

I looked over to see Cruz holding out his slimy fingers. I picked him up and rolled back his sleeves. I held him out over the water and he washed the fish slime off his little hands.

“That’s good.” He said, feeling no more slime. So I set him back down, and we were back to fishing. 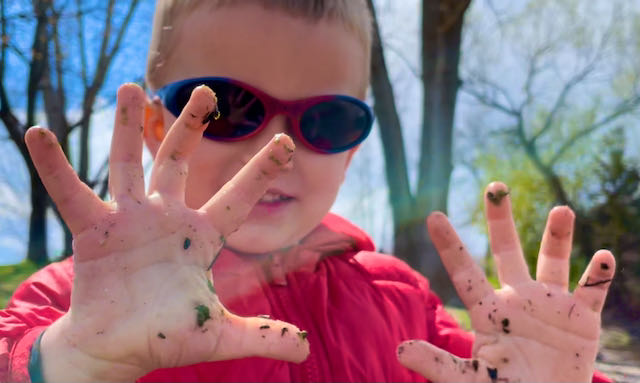 Cruz was now practicing his counting as he stripped in line, and was only able to count to sixteen before another hit.

“This is a really good fly you picked, Cruz.”

“Yep…” Cruz said loudly. “…and, daddy, we are the only ones catching fish.”

I cringed as his high pitched voice could easily carry to the ears of anglers close by.

“Hey, man…” I said chuckling, but I stopped myself from giving him a lecture on humility. He is only four after all, and his little voice saying that could still be considered cute. At least that was what I hoped…

Another rainbow trout scurried away from us when I noticed the time.

“Almost time to go get Mason from school.”

“Yeah, but hurry because we need to go get Mason.”

“I’m a fish monster because I like catching fish.”

“That’s right, and I created you.”

As luck would have it, another fish took shortly after. I could tell it was a bluegill due to the fight, or lack thereof.

“Yes, but are those spikes on the fish?” 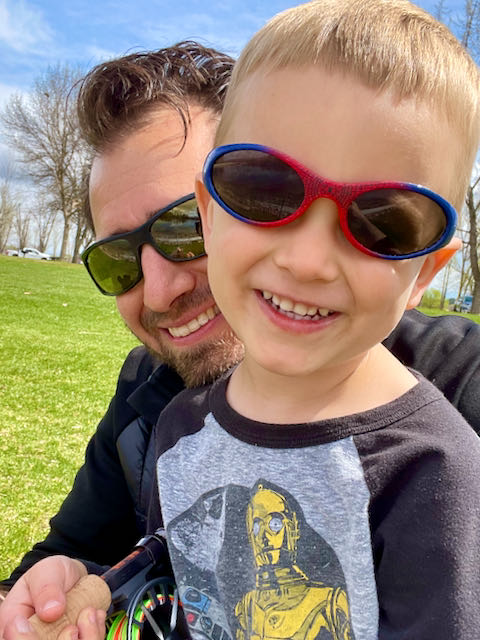 After the fish swam off, we had to make one last cast before clipping off the fly.

“We did good today.” I said, helping Cruz into the van. “And you did great bringing in the fish, and letting them go.” I finished, starting the vehicle.

“Yeah! and… and….” Cruz said, trying to come up with his next words.

“And we were the only ones that catched fish…”

Out of ear shot from any other angler, and behind tinted windows I turned around in my seat to look at Cruz.

“Your darn right we were…” And gave him a little fist bump to end our day.

– Photos and story by Erik Moncada

Click the button to find a local pond in the Boise area. In the “Search By Water Name” field, type in the pond/park you would like to learn about and see when they are stocking next.

Look up past stocking reports on local ponds in the Boise area by following the same steps.